This week I have been teaching my students how to multiply two digit by by one digit numbers using number discs and the place value chart. The expectation for 4th graders is that they must make the jump from the conceptual understanding of multiplication and division to multiplying and dividing using the standard algorithm.

When I began teaching my lesson this week I started with multiplying a two digit number by the number 2 and then increased it to 4 so that the students could grasp the concept with the easier numbers. 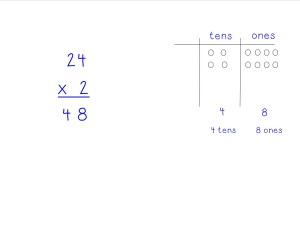 After modeling problems and working problems together with the students, I noticed that there were groups of students who were making errors when multiplying in the tens place and did not understand that when they multiply two digit numbers the number at the bottom represents how many groups there are and the number at the the top represents how many are in each group. One day after school I was looking at the problems that we had worked together that day and I noticed that there was a pattern in each place value. The pattern was that the number of groups were constant throughout the model because each number was being multiplied by the same number. 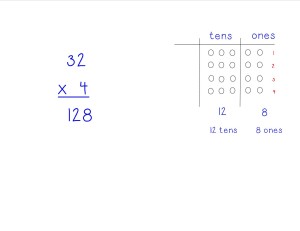 The next day I decided to use this big idea as my essential question ” What pattern can been seen when multiplying two digit by one digit numbers?”. I also made my instruction more explicit by counting and labeling the groups in each place on the model. After reteaching the lesson to the students with these instructional adjustments, many of the students understood that the number of groups in each place on the place value chart should always be the same and that pattern should be consistent even if they were multiplying by a 4 digit number.

This experience has shown me that the mathematical practice that are recommended by the Common Core State Standards are important when teaching math to students. When I was first introduced to the mathematical practice I didn’t pay much attention to them because I assumed that students would automatically learn the practices through instruction ( I was so wrong). I now know that when I plan my lessons I need to not only anticipate the learning difficulties that my students may encounter but determine which mathematical practice that will support my instruction and cement my students’ understanding the concept.