Breaking the Pedagogy of Poverty Cycle 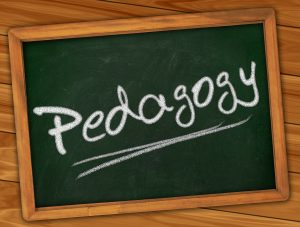 I have always taught in low income or as some would call them high poverty schools. Over the course of 17 years, my view of my role at these schools has drastically changed .

When I finally moved up to a high stakes testing grade level I used to love being the underdog and then coming out on top. Then all of a sudden at the beginning of the 2008 school that feeling had vanished and was replaced with boredom.

I Know Why the Cage Bird Sings

After my 9th year of teaching in Houston, I left Texas and temporarily moved to Louisiana.  I was tired of the constant emphasis on testing. I’m sure you’re wondering why of all places I moved to Louisiana. I began my teaching career in Texas and all I was groomed to become a Texas teacher with Texas ideals. That meant absolutely NO creativity or innovative thinking. As I approached my 10th year of teaching, I began to feel like I was a mouse on a wheel.

Although the East Baton Rouge Parish School System was in total chaos, I was able to tap into my creative side. I received training that increased my math pedagogy. I also became the educator voice for education policy at the state capitol. Two years after leaving Texas I was finally off of the mouse wheel.

While I had finally gotten off of the mouse wheel ,I knew that Houston was my home. On December 7, 2014 with my new found knowledge I left Louisiana and moved back to Texas. I was so happy to be back home but I quickly realized that not much had changed in the Texas school system. While I was learning all of these new instructional strategies in Louisiana many of my Texas colleagues were using the same old teaching strategies.

After a year and a half of teaching in the Texas public school system, I knew that I had changed but the school system had not. To make matters worse the administrators that I worked under made it abundantly clear that they weren’t interested in creativity of innovative teaching ideas.

Breaking the Pedagogy of Poverty Cycle 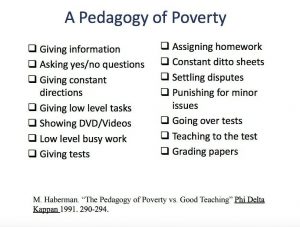 I’m a reader of  all things education. I’m always looking for teaching ideas that will increase my pedagogy and engage my students. While I was preparing for my Twitter chat #UrbanEdChat, the author of the book Culturally Responsive Teaching and the Brain mentioned The Pedagogy of Poverty.

I found the article on the Internet and much to my surprise I had finally had a name for my resistance to the pedagogy of the Texas public school.  Everything that the professor talks about in the article gave me confirmation that  my caged bird feeling is valid!

I have such a different view of how teaching and learning should look in the urban classroom. I do believe that students in urban schools should have structure, however they shouldn’t be treated as prisoners inside of the school or classroom. I think children should be taught how to behave instead of being controlled instead of being told what to do and how to think. The Pedagogy of Poverty doesn’t appeal to me, but the author of the article states that The pedagogy of poverty appeals to several constituencies:

I cannot tell you how many people I have met that fit the above description. I have worked with minority teachers who live and die by the Pedagogy of Poverty by having low expectations for students who look like them. Every time I witness the pedagogy of poverty in progress my response is always the same. You can’t expect students to think and act like intelligent human beings when appropriate behavior isn’t taught and reinforced. 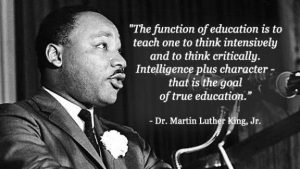 School districts will continue to graduate students who have bathed in the nuisances of the  pedagogy of poverty. If the cycle is going to be broken it will require teachers and administrators to work together to fulfill the true function of education.

PrevPreviousHurricane Harvey: Who Will Care For the Teachers?
Next3 Reasons Why Teachers Struggle with Tier 2 InterventionsNext

3 thoughts on “Breaking the Pedagogy of Poverty Cycle”