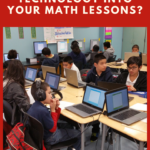 Are You Really Integrating Technology Into Your Math Lessons?

I can remember teaching my first 5th grade math class for the very first time in 2005. The school I transferred to didn’t have any manipulatives and math instruction was nothing to write home about.

On top of not having any manipulatives nor the support in math I needed I was given all of the students who had been either retained or struggled academically. To say the least, this was a challenging school year. Even with no support or materials I was still able to muster out a 70% passing rate on the Math STAAR test.

As I enter my fifteenth year of teaching math, I think about how integrating technology could’ve helped me close so many students gaps.

What is technology integration?

Teachers,  more specifically math teachers, seem to think that having students get on programs like Mobymax, Reasoning Mind, and Prodigy is technology integration. This is called supplementing the math curriculum by using technology programs.

Technology integration takes place when the use of technology is:

– A part of your daily routine.
– Accessible and readily available for use.
– Supports the math curricular goals.

When I first started trying to integrate technology in my classroom I began with flipping my lessons. My principal at the time wasn’t a huge fan of this, but I did it anyway.

Technology integration is the use of technology such as computers, mobile devices like smartphones and tablets, digital cameras, social media platforms and networks, software applications, the Internet, etc. in your daily classroom practices.

Flipping my classroom blew my mind! It showed me that I was doing my students a disservice, because they weren’t independent learners. What I did find out was that these so called “high” students couldn’t even listen to an eight minute video and answer questions at certain points during the video. Yet, these were supposed to be my top students!

What does technology integration look like in a math classroom?

I knew I had to continue to integrate technology in my classroom more, because my students were not independent learners.

The next school year, I moved to another school where I decided to integrate Google Classroom. At the time I knew my school district didn’t support Google Classroom, but I was determined to provide this opportunity for my students.

While I was trying to figure out how to get this done my school district made the decision to purchase GSuite along with Chromebook training. OMG! I was so excited that I talked to my coworker and partner in crime into going to the Chromebook training with me.

I didn’t have anyone to ask about integrating Google Classroom, so I found Alice Keeler’s blog. From there I kind of just made it my own.

Integration of technology in a math classroom will look totally different from a heavily text based classroom.

I’m not convinced that math classrooms should be one hundred percent paperless. Early on I had to decide how much of my classroom assignments did I want to be paperless. I settled on fifty percent. This helped a lot because even though I used Nearpod and Edpuzzle I always had a paper component along with the lesson.

Changing the Landscape of the Traditional Math Classroom

Everyday we send nonverbal signals about what’s important in our classrooms. Where you keep your technology in your classrooms sends a message as well. If your computers are not easily accessible for students then students will think that technology is not a big part of your classroom. In my classroom, I kept my Chromebooks on a table in bins. The students had to walk by the table in order to get to their desks. Most days when the students walked passed the table they would ask if we were going to use the Chromebooks today.

Using computers throughout your math lessons will be liberating for students. During my math lessons when they were curious about something, they wouldn’t ask me anymore. I didn’t even have to tell them to look up something on the Internet. Before I knew it, most of them would say, “I’m going to look that up on Google.”

As the school year progressed, my students became more confident in their ability to think on their own. I felt like they were releasing the expectation that I was the keeper of all knowledge. It was great!

They were finally becoming independent thinkers. Even my Special Education and 504 students started using their classmates as resources. At last, I was finally free to be the facilitator.

There’s never a perfect time to do anything. Now is the right time to start integrating math and technology. You may not realize it but you need this integration just as much as your students.