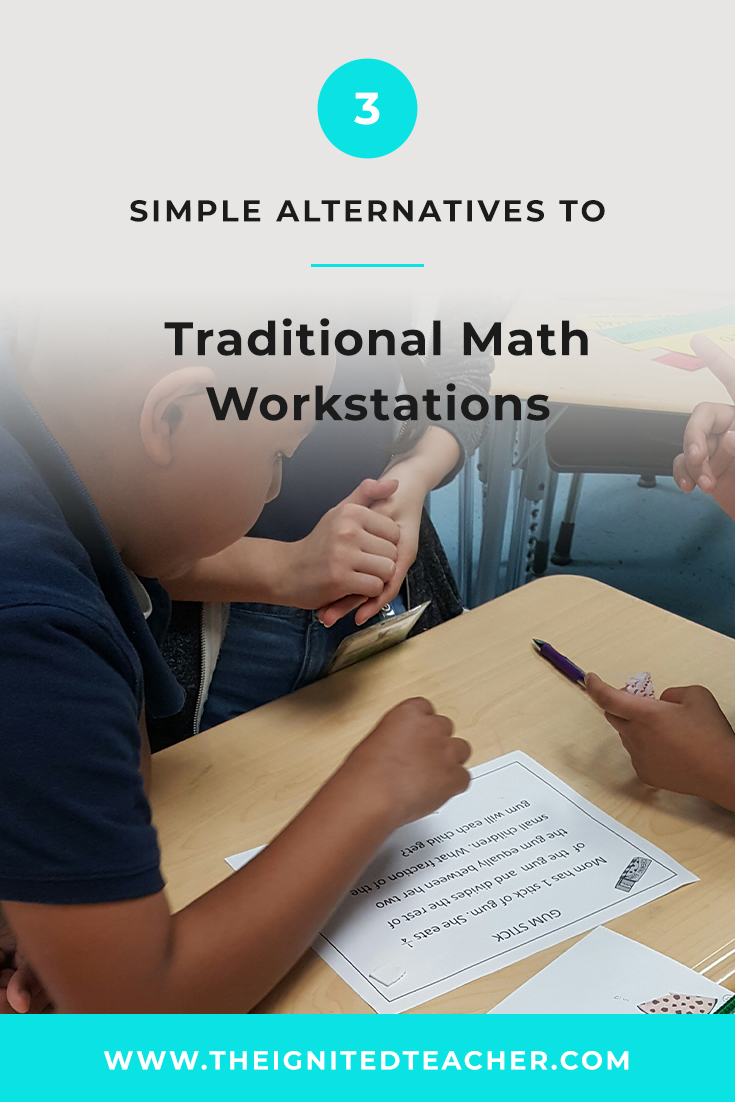 Before I moved to high school as a Math Interventionist, I taught elementary math for over fourteen years. When I taught fourth or fifth grade every year without fail, I’d always have the same struggle with my administration over math workstations.

At the beginning of every school year, the Teacher Development Specialists would descend from high to meet the teachers at their campuses.

They didn’t care that my small group instruction was closing my students’ achievement gaps. All of them just wanted to see their one dimensional idea of math workstations in my classroom.

It Was Just NOT Working

If you’ve read any of my previous blog posts you know that I work with students who have enormous gaps. Often times the traditional math workstations didn’t keep them on task and engaged.

While I was engaged in teaching my small group nothing was getting done by the other students. The students would play around with the manipulatives, have irrelevant conversations, and complete the workstation work incorrectly.

After about a year, I decided that I’d had enough of the foolishness! I knew that the math workstations that the school district wanted to see didn’t work. I created them anyway just for compliance.

In 2015, after teaching for fifteen years I decided that I was going to create math workstations that grasped my students’ attention, kept them on task, and helped to close their achievement gaps.

Since I needed to keep my students on task and engaged I changed three things.

At the time I didn’t have access to Google Classroom so I wrote their workstation agenda on the board.

My students needed more structure so I decided not to make them rotate math stations or use the Daily 5. Instead I laid out everything on the agenda in sequential order that needed to be completed on small group days. Then if they had time they would complete the early finisher assignments.

Since I had so much success with not doing the traditional workstations the previous year, the next year I began to use Google Classroom for my agendas. This made things so easy for me and the students because I could now add links in my agenda to Mobymax and Reasoning Mind.

The last change I made was huge! It increased my Special Education and 504 students’ test scores. It’s no secret that I’ve always felt that traditional math workstations deny Special Education and 504 students access to the general education curriculum because there wasn’t anyone around to help them.  With that being said, for them I assigned the Mobymax Fact Fluency and lessons for them that were at their independent levels. Sometimes I would allow them to complete a Reasoning Mind lesson for an upcoming lesson. Even though they didn’t fully understand the lesson this kept them from being totally lost during my introduction to the new concept.

I know that some of you are going to say I don’t have a classroom set of computers. Well neither did I! I had to submit at least five Donors Choose projects to get twenty Chromebooks for my classroom.

Dealing With the Naysayers

Just like with everything else there’s always going to be people who won’t support you. Trust me I’ve had my fair share! From my campus administrators all the way to the district office personnel.

One school year, it had gotten so bad that it had gotten back to me that one of the math Teacher Development Specialist from the district was going around telling people that I thought I knew everything. It wasn’t difficult to figure out who was saying this stuff about me.

I’ve come to the realization that people will ALWAYS have something to say about you. It’s easy to go from sugar to sh*t in two seconds. This is why I don’t focus on what anybody has to say about what I do in my classroom. As long I’m getting results and my students are confident in what they are  learning, what people say about me is irrelevant.